Milton was born near a small town of Derry Church, Pennsylvania and his family were Mennonites. The Hershey family moved several times when Milton was young and that made it hard for him to be a good student.  When Milton was 13 he had attended 6 different schools.
Milton had a sister, Serena, but when she was 5 years old she died. After his sisters death Milton's mother did her best to make sure he would be successful. His father was not a very successful man, he had a lot of ideas but was never able to profit from them.
Milton quit school in 1870 with a 4th grade education.

Milton's first job as an apprentice was with a printer named Sam Ernst. After 3 months Milton lost this job because he could not read or write very well due to his lack of education.  His second apprenticeship in 1872 was at an ice cream parlor working under Joe Royer in Lancaster, PA.. He spent four years working there and he found that he loved to make candy.
Milton decided it was time to start his own candy company. 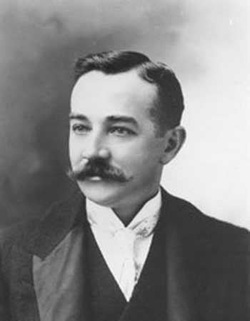 In 1876 Milton thought that he was ready to start a his own candy store, but it was too much money so Milton borrowed $150 from his aunt, Mattie. Milton opened a taffy store in Philadelphia, PA.. This was the United States 100th birthday and he thought it would be a great place to start his business. Milton worked very hard and tried to make many varieties of candy to please a lot of people, but this cost more money and made him work even harder. After six years of trying he closed this business and moved back to Lancaster.

Milton traveled to Colorado and learned to use milk as an ingredient instead of paraffin to make caramels. Milton worked as an apprentice while in Colorado. He traveled with his father to Chicago and New York. Milton was learning a lot from his travels and working under many experienced candy makers but he still wanted to own his own candy business. The only problem was that he did not have enough money and now his family could not loan him any more.
Milton had a friend named Lebbie Lebkicher and he took him in at this time and was able to help Milton by starting another business making caramels selling them from a cart. Milton had a break when an Englishman tried his caramel, he thought they were the best he had ever tasted. He placed a large order to be shipped to England!  Milton had to borrow money from the bank in order to fill this order. He was able to find a banker Mr. Brenneman that believed in him and loaned him the money he needed to fill the order. When Milton was paid by the Englishman he rushed to the bank and payed the money he owed and now he was in business!. Lancaster Caramel Company, his caramel, Crystal A. Cream was successful. 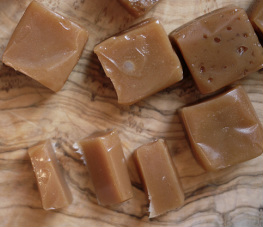 With his successful business he was able to travel and learned about making chocolate. He experimented with this back in Lancaster and finally he created Hershey's cocoa, baking chocolates and candies. In August of 1900 he sold the caramel factory for $1,000,000. He kept the rights to the chocolate recipes and later that year introduced the Hershey milk chocolate bar. 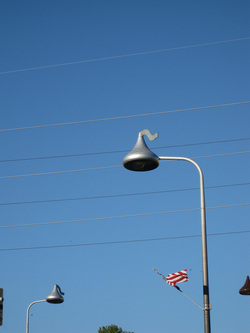 These are street light poles in Hershey Pennsylvania.
Milton needed a place to build his factory and what a better place then Derry Church, PA. This was near farmland with cows, fresh milk, and the railroad went through this town too. In 1903 Milton broke ground on his new chocolate factory and the town grew due to the employees he had working for him. With the success of his company the town flourished with schools, churches, parks, stores and entertainment places.
What is Hershey, Pennsylvania? It is city of chocolate. The city was named after Milton S. Hershey's chocolate factory he had built.
Milton had the right idea to make Hershey, PA into a tourist town. People still like to travel to Hershey PA, every year. 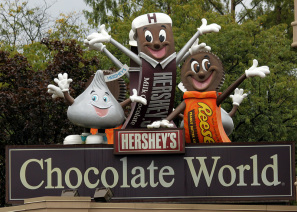 This is a sign that is of Hershey Pennsylvania.

Milton and his wife, Kitty, did not have children. They were very devoted to the town that was surrounding their factory so they established a school for orphans.  The school was only for boys but later the school also enrolled girls. Thousands of children have been helped because of this school. 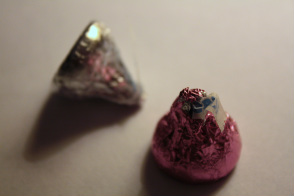 In 1907 Hershey kisses came off the chocolate line. They say this candy got its name from the sound the machine makes when the chocolate comes out. In 1925 Hershey brought MR. Goodbar a milk chocolate peanut bar. In the 1930s they came out with Krackels, a chocolate bar filled with crisped rice, and Hershey miniatures, a tiny versions of all the Hershey's bars made.
The Military wanted chocolate for the soldiers so he made Field Ration D chocolate bars. These were small in size, did not melt, and gave the soldiers energy.
When Kitty died, Milton did not stop making chocolate. After Milton died the chocolate factory is still making chocolate, the Hershey chocolate factory came up with newer chocolates like Hershey with almonds, Cookies & Cream, and Hershey's Chocolate Syrup are just a few.

In a building at Milton Hershey School there is a statue of him with his arm around an orphan boy and these words are written
"His deeds are his monument. His life is our inspiration."
Powered by